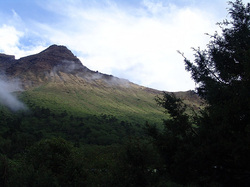 The Bonobo is a chimpanzee that lives in the jungles of Africa. They are gentle animals with an intelligence level. Unless some action is taken, they may become extinct from hunting and deforestation.

Where They Live
The Bonobo lives in the jungles of the Democratic Republic of the Congo in Africa.

What They Eat
They primarily eat fruits, leaves, and branches. Sometimes, they eat ants and small animals.

That They Are Like
While there is some resemblance to the Chimpanzee, the Bonobo has slimmer body and long arms and legs. Their hair is parted in the middle, and long and standing at the side of their ears. Can you tell the difference?

The Dhole is a member of the Canidae (dog) family and they take good care of the members of their packs. However some people considered them to be a fierce animal that attacks livestock and killed many of them with guns and traps.

Where They Live
They live in the forests and grasslands of West Asia, China, India and the Malaysian peninsula.

What They Eat
They prey on rabbits and deer, sometimes even bears and tigers. Sometimes they also eat insects and fruits.

What They Are Like
Dhole adults take good care of the cubs in the pack even if the cubs are not their own kids. They watch out for predators that come near their dens, and carry the cubs away if in danger.

The Red Panda and Giant Panda have the same "panda" in their name but they come from different families. They are becoming extinct because the forests are becoming smaller.

Where They Live
The Red Panda makes his house in China, Nepal, Myanmar, and other mountain woods.

What They Eat
The Red Panda loves chomping on bamboo but he also eats plant leaves and fruit.

What They Are Like
The Red Panda is a super tree climber. He balances with his long tail. And he sleeps in trees!

Where They Live
High mountains, like those in Central Asia and the Himalayan range.

What They Eat
The Snow Leopard eats goats, sheep, rabbits and birds. It can catch prey over 3 times its own weight!

What They Are Like
In order to live comfortably in cold and snowy climates, the Snow Leopard grows fur even on the bottom of its feet. It springs upon its prey with a strong, speedy jump!

The Purple-faced Langur is a monkey that lives only in the forests of Sri Lanka. Their numbers have dropped to a half over the last few decades due to deforestation and hunting.

Where They Live
The Purple-faced Langur lives only in the forests of Sri Lanka.

What They Eat
The Purple-faced Langur loves to eat tree leaves.

What They Are Like
The Purple-faced Langur lives in packs among rival packs within a small area. For this reason, the males engage in fierce territorial bouts to overtake other packs.

Where They Live
They live only on the Indonesian island of Sumatra.

What They Eat
They hunt animals like deer and wild boar, rabbits, and birds. Sometimes they also eat bugs and fish.

What They Are Like
They are the smallest kind of tiger. Their sharp claws and fangs take down prey much larger than them.

The Giant Panda is a superstar in the animal kingdom. The forests where pandas live are becoming smaller and smaller, and they may not be able to find mates or food anymore.

Where They Live
They only live in the forests of China.

What They Eat
The Giant Pandas' favorite food is bamboo. Sometimes they also eat small animals and insects, as well as fruits.